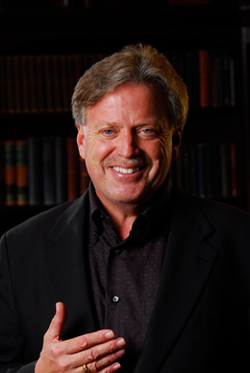 Fueled by his own dramatic deliverance from drugs, alcohol and crime in 1975, Steve Hill dedicated his life to spreading the gospel of Jesus Christ around the world. His passion to help those who were hurting and his pursuit of genuine, God-breathed revival only intensified after years of missionary work, church planting, and evangelistic crusades.

From 1995 to 2000, Steve served as the evangelist of the Brownsville Revival in Pensacola, Florida. Widely covered by the media, this incredible series of meetings drew over 4 million people through the doors of the Brownsville Assembly of God church. News began to spread around the world that something out of the ordinary was happening at this revival. During those five years, the devout, the cynical, and the curious came from all walks of life, traveling from as many as 150 different nations around the globe. Hundreds of thousands wept at the altars, repented of sinful lifestyles, and gave their lives to Jesus. Lives were dramatically changed, marriages were restored, and addictions were broken as the Gospel of Jesus Christ was presented with clarity.

As invitations to minister poured in from around the world, Steve felt the burden of the Lord for those who couldn’t attend the Brownsville Revival. In 2000, the ministry relocated to the Dallas/Ft Worth area and launched a major worldwide campaign through crusades and television to reach millions with the Gospel. In 2002 while preaching in Germany with Reinhard Bonnke, the Lord spoke clearly to Steve, “My sheep need a fold.” Steve knew the Lord was calling him and Jeri to plant a church in the Dallas/Ft Worth area. In 2003 Heartland World Ministries Church was launched and today is a thriving group of believers who are passionate about the Lord and about reaching our world with the Gospel of Jesus Christ.

In 2007, Steve was diagnosed with Melanoma cancer and began a long, hard-fought battle for his life that lasted seven years. During that time, he continued to do everything he possibly could to reach people for Christ. In November 2012, Steve had a vision of a massive spiritual avalanche that could destroy millions. The vision was a warning from the Lord about dangerous false teaching that is permeating the Body of Christ in the Last Days, causing multitudes to spiritually shipwreck. Realizing the urgency of the message, in just one month’s time while undergoing cancer treatments, Steve wrote a book, Spiritual Avalanche, detailing the vision which was published in March 2013. One year later, on March 9, 2014, Steve went home to be with the Lord.

Steve’s amazing legacy of reaching souls for Christ and impacting our world with the Gospel continues on through the entire Hill family. An anointed preacher in her own right, Steve’s wife Jeri, serves as president of Steve Hill Ministries. Their daughters Kelsey and Shelby, and son-in-law Aaron work alongside her preaching in churches, conferences, youth events, ladies meetings, on the mission field and around the world.